The New Face of Doodling

I have come across a phenomenon that is being called a "new" art-form on a few blogs lately (such as iHanna and The Knitted Blog). This phenomenon is called "zentangles". Sounds like a new form of rectangle...but it's pretty much a fancy name for a particular style of doodling that is supposed to double as a medetative act. It is described as a "relaxing method of creating beautiful images from repetitive patterns" ... a "process of simple deliberate strokes which build on each other in beautiful, mesmerizing and surprising ways" .

I think it's funny this website has given it a name and started to market it. They have "Zentangle Kit" they sell for $50 with special Zentangle "tiles". I love how the Knitted Blog put it..."Mine aren't true zentangles, to be 'zen' with your 'tangle' you need to use a black fine tip pen and 3.5 inch square white card and not the back of envelope while chatting on the phone."
Personally, I too am satisfied with a blank page and a pen. The idea that this is a "new" thing amuses me greatly. I've been doing it for at least a few years now. The pages of my journals are littered with what could be considered "zentangles". I do it when I'm bored (I usually reference one I did during a Union Meeting that I actually entitled "Bored Union Meeting Doodles"), but it doubles as a way to help me focus while sitting and listening, like during a meeting at work or during church. Sometimes they have linear style, but most of the time I have a more tribal looking style. 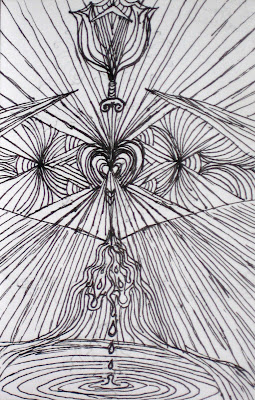 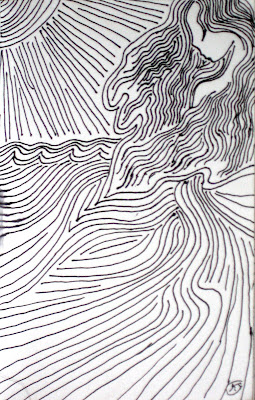 Sorry, I don't have any of my more tribal-looking images scanned in. I'll try to include some of those in a later post.
Posted by Kira at 6:36 PM 1 comment:

Here is the "SkyWheel" in Niagra Falls. It's pretty much a big ferris wheel with enclosed compartments. Not as fancy as the one in London, where CJ tells me you can actually stand in the cars, but the cars are enclosed and heated in the winter (it was hot the day we went on it, so that wasn't a factor...but it did have air). I'd love to go on this again sometime at nighttime. I hear it's gorgeous seeing all the lights from the city and on the Falls. 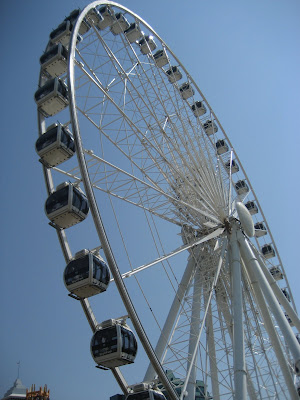 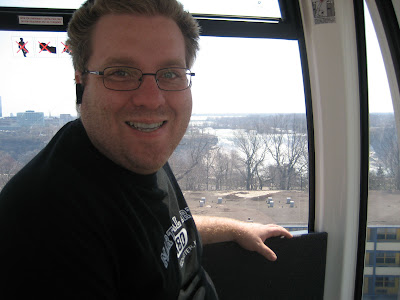 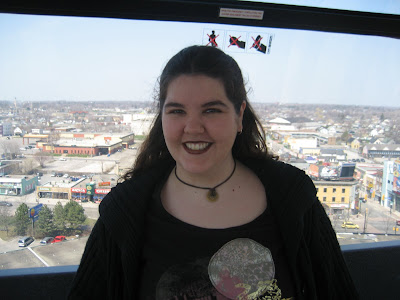 Me trying to enjoy the view and not freak out at every sway of the enclosed car. 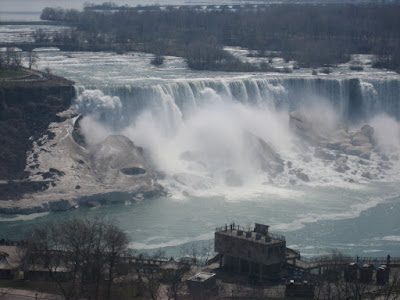 A shot of the Falls from the SkyWheel.

A link to SkyWheel Info
Posted by Kira at 11:20 PM No comments:

CJ and I used our last weekday of Spring Break yesterday to take a trip to the Canada side of Niagra Falls and then visit some friends in Buffalo. We had a blast. While we were waiting to cross the border, CJ pointed out that it's the first time we've been out of the country together. Awwwww. It was so much fun and we didn't even get to do everything. We're talkiing about possibly spending our anniversary there next year.

First, we went to the butterfly conservatory. Almost as soon as we were in Canada, we saw a sign for the conservatory and decided on a whim to go. It was gorgeous. They had a lot more butterflies than either of the two butterfly gardens I've been to before (Rochester's Strong Museum and Cleveland's Botanical Gardens). 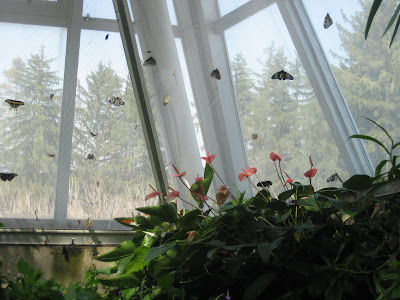 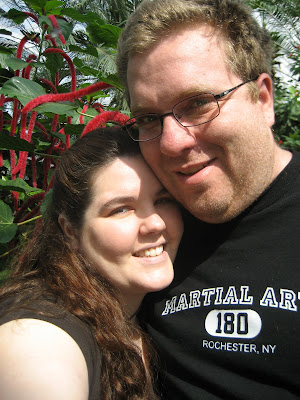 I wanted to get a good picture of a Blue Morpho so bad (they're my favorites), but they close their wings when they land, and the outside of their wings are nothing like the inside. With their wings closed they're all brown and spotted and you can't see the blue. 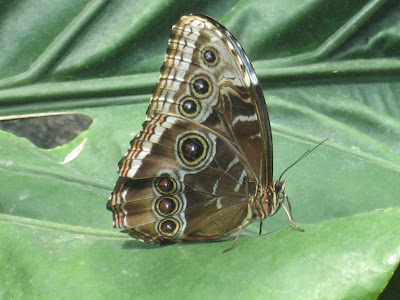 There was one settled on the edge of the walk with its wings fully open. I actually thought it was dead at first...but as soon as I walked over to try to get a picture of it, it closed up its wings! It was taunting me! CJ tried gently touching its antennae with his foot, trying to coax it to open up again for me, but I was nervous he'd accidentally crush it, so he stopped. But not before I caught a picture of it flashing some fleeting blue. 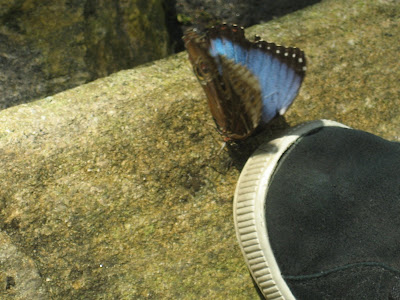 The only other "good" picture I could get of them was once while they were flying. (It's difficult to get butterfly action shots!) 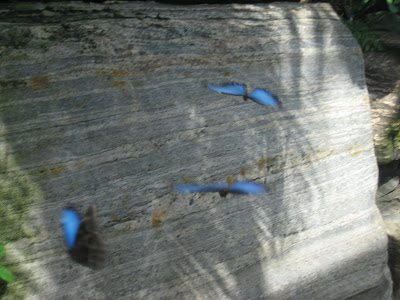 And while the Blue Morphos decided to be teasing and elusive, some of the other species were more obliging and allowed me to take some beautiful shots of them. 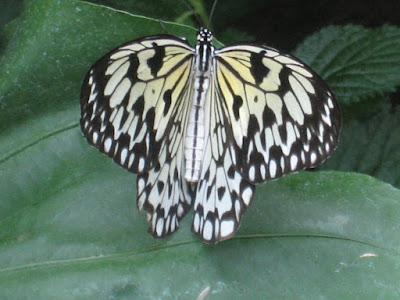 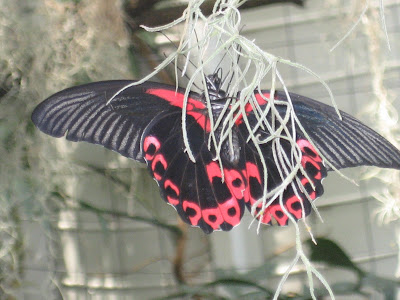 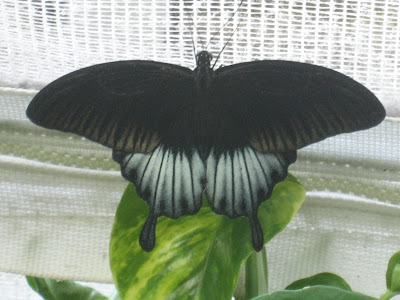 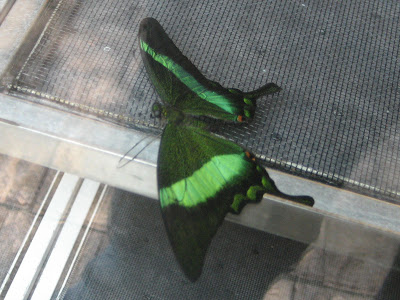 Here's the finished blanket that started with that first square I did at my grandma's house! 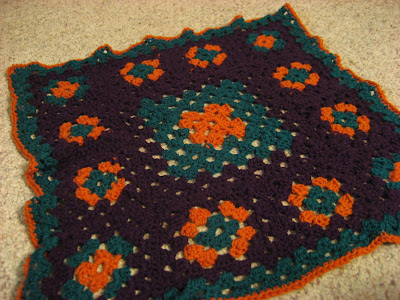 It's a baby blanket...although not a very big one. I've been told it works for an infant blanket or just a security blanket. I have one friend who just had a baby last week, and two more friends who are pregnant and due in May and June. But evwryone is having boys...and I tink this blanket looks too feminine to give to a boy. But I'm all about making squares now and am working on another blanket with some browns and blues (I'm really drawn to that color scheme lately!) 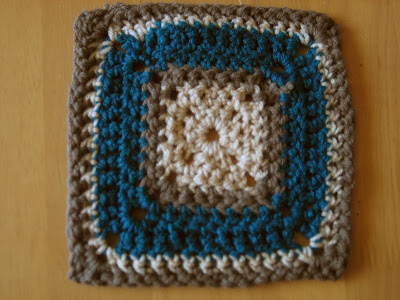 I like the new Battlestar Galactica (I know, I'm a geek). I like the show and I love the music. I have the soundtracks for the first 3 seasons (I played the very Celtic-sounding "A Good Lighter" from the first season at my wedding). Season 4 is about to start on Friday night. Yay!

If you have no clue about the new BSG or need to catch up (like me...especially since I missed all of Season 2) watch What the frak is going on with BSG? on SciFi.com, an 8 minute catch up of the first 3 seasons (which I'm pretty sure is voiced by the same deadpan, fast-talking girl who narrarated the LOST 8 minute catch up).

So what's so crafty about BSG one may ask? Well, I've found out about a contest that the SciFi channel and Make: magazine are doing.

It's just an idea at this point, but I'll keep you updated as the project progresses.
Posted by Kira at 1:31 PM No comments: