After fulfilling my compulsion to clean the house last night, I decided to fulfill my compulsion to make a dent (well, more like a ding...or maybe a scratch) in the mountain of socks I've recently aquired. So I made this guy out of a toesock from Carrie. The sock was in great condition, but I couldn't see myself wearing a sock so bright. Yeah...I've grown up a little bit...but don't worry, just a little! I still have toesocks I wear, but in more subdued colors. 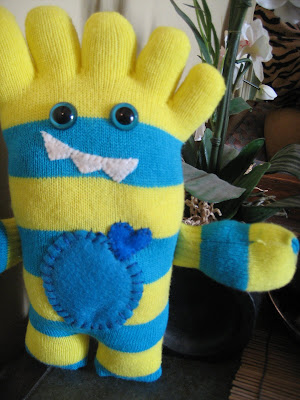 Look at the quirky little smile! It looks like he's up to something doesn't it?
I still have the mate to this sock...so keep on the lookout for when I make his brother!

Mucho kudos to my co-worker Sue for the bag of socks she said I could have! Kudos as well to my other co-worker Carrie who gave me a few pairs of socks as well (and toesocks nonetheless!).

Then I cleaned out my own sock drawer for socks who are either past their prime or just never get worn. I have soooo many soooocks! I am not allowed to buy any more monster making fabric until I've used up at least half of the socks I have!
I can't wait until school ends (for anyone who doesn't know, I'm a teacher's aide at an elementary school) Only 3.5 more weeks (June 25th is my last day)! Then I'll be freeeeee to be craftyeeee all dayeeee! And then maybe this can turn into a daily blog instead of a semi-weekly/whenever-I-feel-like-it blog.
Posted by Kira at 6:18 PM No comments:

One way CJ and I occupied the kids while Karl hunted for frogs was using a flashlight and my camera. I'm usually very frusterated at my camera when I want the flash off because it automatically has a slower shutter speed and blurs the image very easily. But I've finally found an entertaining use for this annoying quirk...capturing light doodles (like those Sprint commercials)
These are with CJ moving the flashlight... 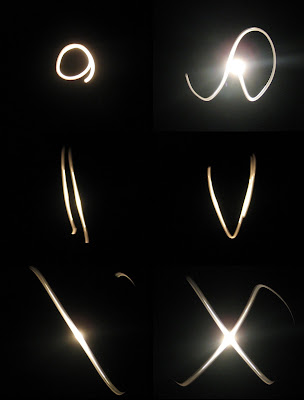 Here are the kids' attempts.. 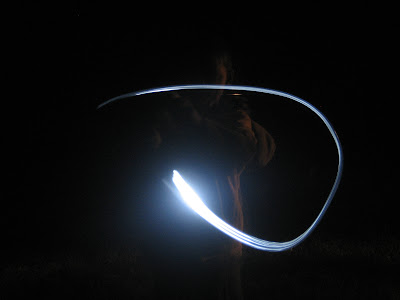 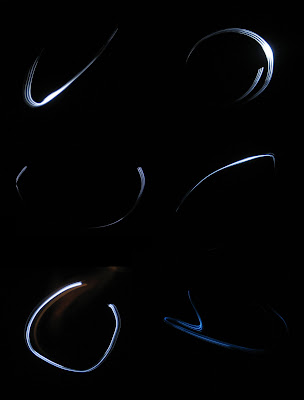 Fun stuff. Amazing what you can come up with to keep kids occupied.
Posted by Kira at 9:58 PM No comments:

A Night of Frog Catchin'

We went with Bill, Rachel, Karl, and Kim to Kim's parents' house on Sunday night. They live on a farm with a big pond near the house. Karl went frog catchin' and got each of the kids a big ole' frog to hold. Yee Haw! Good ole down-on-the-farm, country entertainment! I love it! CJ and I went with Karl and Bill to help keep track of the kids (ie: keep them occupied and quiet while Karl snuck up on the frogs). And of course I had to use my camera to document all the fun. 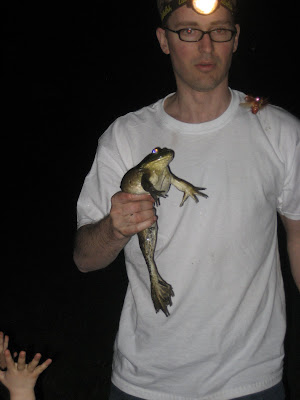 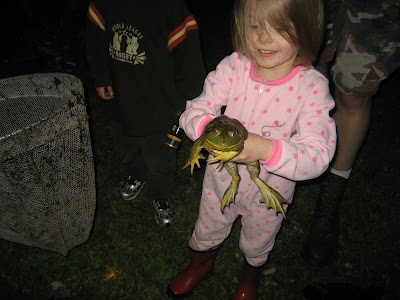 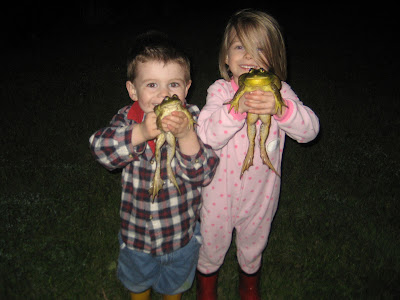 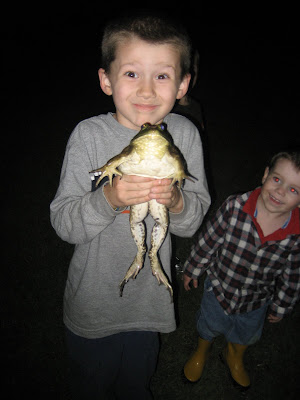 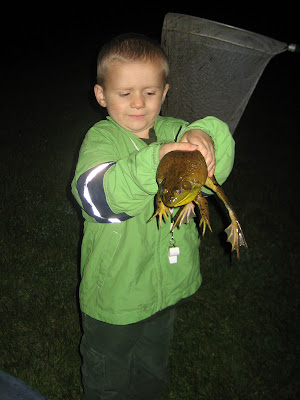 "Um...I'm not so sure about this!"
You can tell just by the looks on the kids' faces which of them had held frogs before and which ones hadn't! The boy and girl in the picture together are Karl and Kim's kids, who have been to the the farm before and have probably done this with their daddy before...the two boys are Bill and Rachel's kids. Yeah...we be city folk. 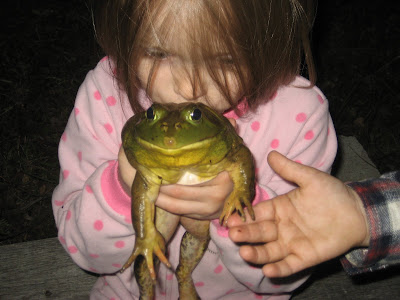 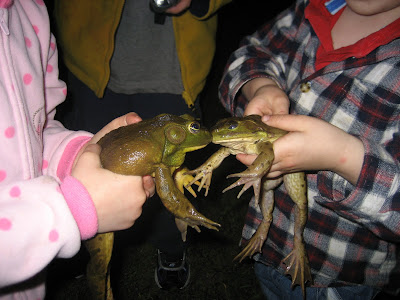 By the end of the night we had about 4 or 5 frogs in a cage, and then we set them loose back into the pond. 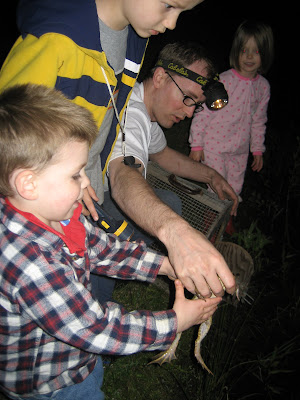 Poor traumatized frogs. But at least the kids had fun! ;)
Posted by Kira at 5:07 PM No comments:

Another fleece monster! I made this cutie this weekend. We didn't have much time to bond, since I gave her away within 24 hours of finishing her. My friend Rachel's daughter Maggie turned two years old this past week, so I gave the monster to her as a birthday present.
(BTW: The blanket in the background of the first picture is a work-in-progress crochet blanket for my friend Kim who just had a baby boy about a month ago) 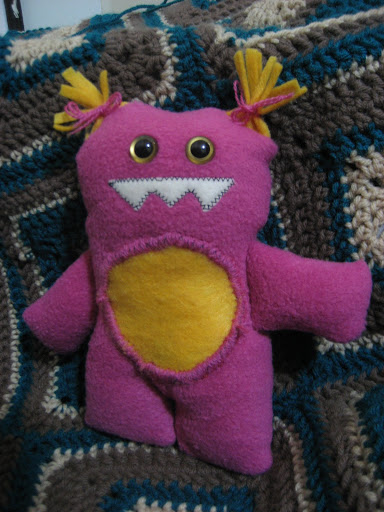 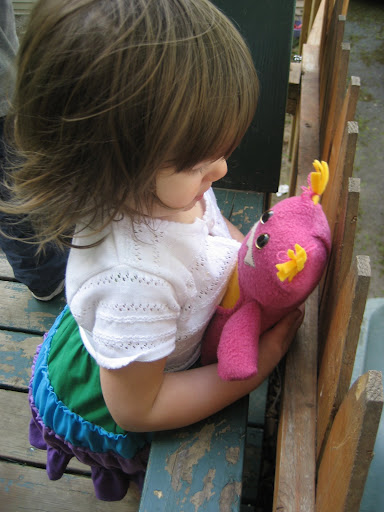 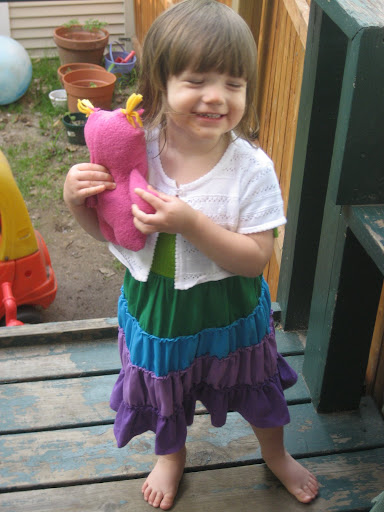 Email ThisBlogThis!Share to TwitterShare to FacebookShare to Pinterest
Labels: monsters 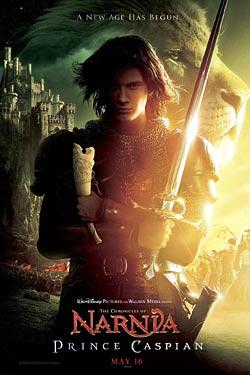 I recently saw the new Chronicles of Narnia movie "Prince Caspian" (on opening day to be exact!). And it has sparked anew my love of the Chronicles and the symbolism it holds.
I've loved The Chronicles ever since I read them as a 9 or 10 year old girl. My great aunt ( a wonderful Christian woman) had given me a boxed set of the books when I'd been much younger. They sat on my bookshelf in pristine, untouched condition until I "discovered" them in 4th or 5th grade. Now, as a 25 year old married woman, that same set is on my bookshelf in a dogeared, well worn, well read, well loved condition.

I can't remember when I understood the idea that Aslan was a Christ-figure and that the part where Aslan is killed in Edmund's stead in "The Lion, The Witch, and The Wardrobe" is an allegory of Christ's death and resurrection. I know I didn't get it when I first read the books, but I do know that I understood it eventually and that it fascinated me.
After finding out that there was "hidden" meaning in the story, I was hungry to know what other allegories and symbolism were in the rest of the Chronicles. I spent a lot of time when I was 12 reading a book called "The Companion To Narnia" to try and dig out those concepts. I have grown a lot in the Lord since then, and am itching now to re-read the Chronicles and dig out even more.
Illustrations speak to me. I am all about symbolism and illustrations. It isn't unlike the way Jesus used parables in the Bible. Just watching this most recent movie spoke to me about things I have been going through in my own life...one big one being faith.
Aslan is not (physically) present in much of the story of "Prince Caspian". And a big thing for the Pevensies and the Narnians is to have faith in him and not to take matters into their own hands. 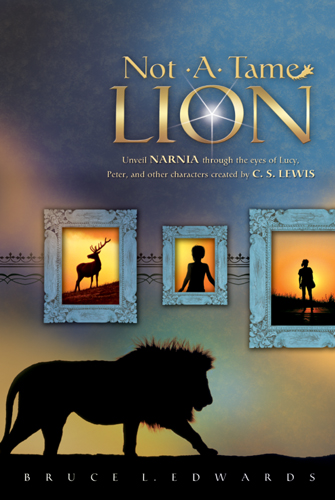 Before the last Narnia movie came out, I bought a book back called "Not a Tame Lion", a book that unpacks some of the spiritual concepts within the Chronicles. This is a quote speaking about a passage in "The Lion, The Witch, and the Wardrobe"

"Then he isn't safe?" said Lucy
"Safe?" said Mr. Beaver. "Don't you hear what Mrs. Beaver tells you? Who said anything about being safe? 'Course he isn't safe. But he's good. He's the King I tell you."

"How is goodness a counterpoise to not being safe? Isn't goodness a synonym for safety?......Not safe but good? Reverse it, and you get the effect: Good but not safe. Goodness can't be trusted to leave us alone, untouched and unmoved. Goodness makes demands, putting something or someone at risk. Goodness has a very personal price tag."

Following God, in reality, isn't safe. It costs us a lot. But it's good.
Posted by Kira at 4:05 PM No comments:

I made this monster for yet another a friend of mine who's having a baby (Babies, babies everywhere! ) I'm crocheting a matching blanket to go with it. She had a baby shower that I didn't make it to, but I'm hoping I'll get to get together with her soon. 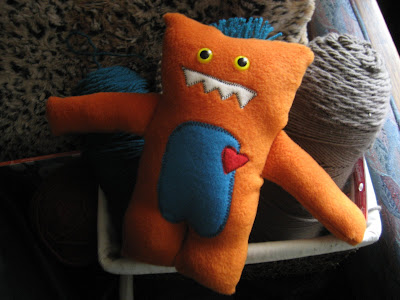 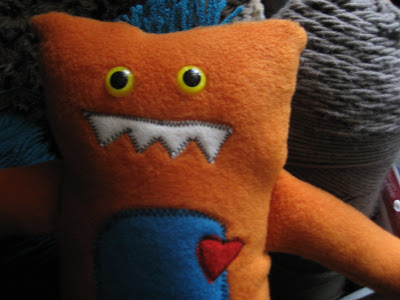 This guy is made out of some fleece I got out of the remnant basket at JoAnne Fabrics. His stomach and heart are felt. I think it's because of the fleece that he looks like the most "professional" looking monster I've done so far.

I have some pink fleece I'm itching to use to make another one.

Email ThisBlogThis!Share to TwitterShare to FacebookShare to Pinterest
Labels: monsters

Some "zentangles" I doodled a few weeks ago. They just kind of evolved into characters instead of being abstract images...but I don't care, they're cool. The angry monster is my favorite. He looks like he's having a tantrum. 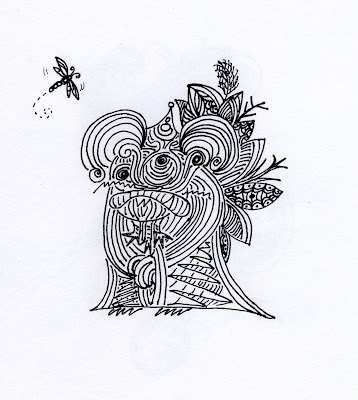 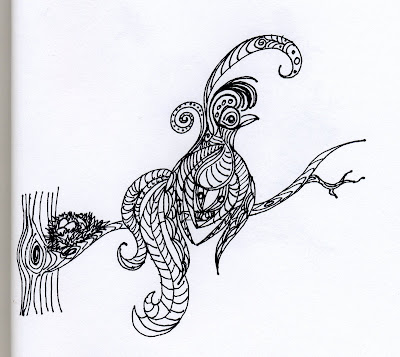 Okay, I'm supposed to be buckling down and cleaning my house right now, but I need to post my most recent craft. I'm so proud of myself...I actually made a dress today. Granted it's not like I made it from scratch. It's more of a "repurposing" of a previous garment (specifically one of my husband's old button-down shirts). I got the idea from this link. 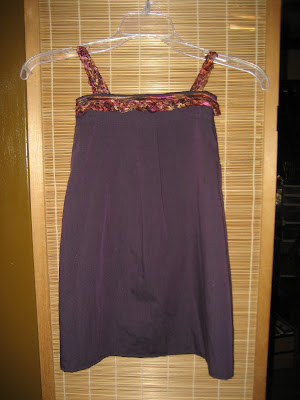 I decided to do something different witht he sleeves and crocheted them instead of sewing them. Here's a detail shot of the crochet embelishment on the front. 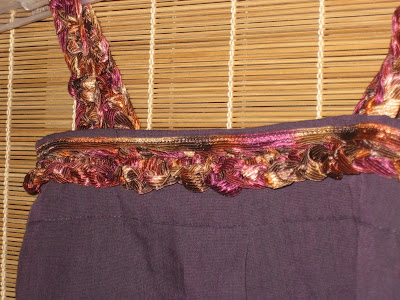 Darn, I forgot to get a picture of the back! And I already gave it away to my friend Rachel for her little girl. I'm sure I'll get to take pictures of it on her sometime. And I have plenty more shirts to use to make more. This would be a good type of thing to put in my future Etsy shop. If anyone is interested in one, give me a holler.
Posted by Kira at 1:44 PM 1 comment: